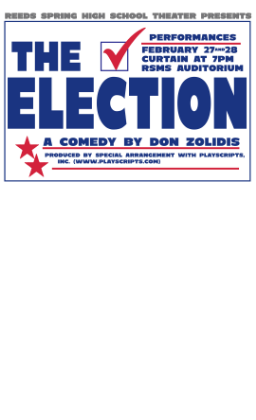 The Reeds Spring High School Drama Department will perform The Election, a comedy by Don Zolidis on Thursday, February 27 and Friday, February 28. The shows begin at 7:00 p.m. in the middle school auditorium. Tickets can be purchased at the door and cost $5 for adults, $3 for seniors, and $2 for students.
The Election follows Mark Davenport (played by Chase Johnson) who figures he will cruise to victory in a special election when embattled student body president resigns.
After all, Mark's only opponent is nerdy Christy Martin (played by Olivia Mottl), who wants to eliminate football. But when a mysterious Super PAC gives her an unlimited budget, things start to get very ugly.
Mark must face total annihilation or accept the services of a slick professional campaign manager with questionable ethics and a million-dollar Super PAC of his own. This is a hilarious and timely satire on the contemporary political scene.
Published February 18, 2020 Print