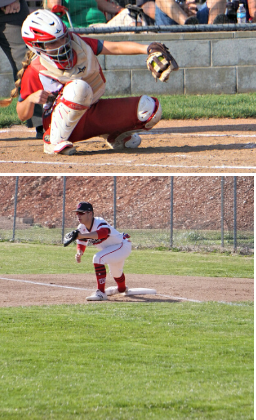 Reeds Spring High School seniors Maddison Cantrell and Paxton Smith each signed a National Letter of Intent to continue their athletic careers at the next level. Cantrell will play softball at Fort Scott Community College and Smith will play baseball at College of the Ozarks.

Cantrell was a four-year starter at catcher for the Lady Wolves. She was named to the All-State Team last season and is second in school history for career RBIs (95) and RBIs in a season (38). Cantrell said she chose Fort Scott after attending a camp and visiting the campus.

“The team is amazing,” Cantrell said. “I love their personality. I’m going to fit in really well there.”

Smith has enjoyed most of his success on the mound for the Wolves. Last year, he had an earned run average (ERA) of 2.61 with 21 strikeouts in 15 innings. He also won two games and had a save. He has also played catcher, first base, third base, and right field. Smith said he will most likely just play one position for the Bobcats.

“I think I’m just going to be a pitcher only,” Smith said.

While Cantrell and Smith are excited about their futures, they will also miss their time at Reeds Spring.

“I’m going to remember how much fun I had,” Cantrell said.

Cantrell has not yet decided on a major. She plans to take care of her general education requirements at Fort Scott. Smith plans to study biology or anatomy, with hopes of eventually going on to chiropractic school.