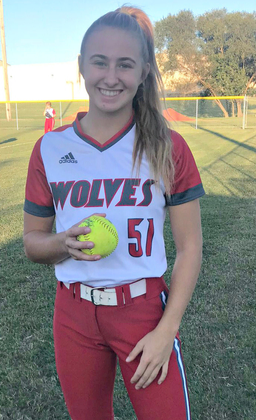 Reeds Spring High School's Izzy Erickson broke the school record for career home runs by a softball player. She belted her 17th home run last week in a 2-1 victory over Seneca. The Lady Wolves are 16-5 on the season and begin the district tournament this week.

The Wolves fell to Marshfield, 32-7. Matt Allison had the lone touchdown for the Wolves, scoring on a 63-yard run. Colton Cramblett rushed for 108 yards on 15 carries. The defense was led by Adam Lewis who recorded 15 tackles. RSHS (4-3) travels to Cassville on October 18.

The Lady Wolves tennis team ended the season with a 5-0 loss to Willow Springs in the district tournament. In the individual district tournament, juniors Mckenzie Coffelt and Ashlyn Shafer played strong in doubles play but ultimately lost to Clever in two sets.